If there is no solution, then it’s not a problem. It’s a regrettable situation. It’s a boundary condition. It’s something you’ll need to live with. Seth Godin

Live with it? For how long? It feels empty when I have debunked a problem as a boundary condition. 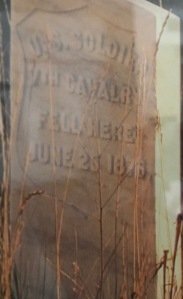 Mine is a love-hate relationship with boundaries. My boundaries are sacrosanct and everybody else’s, not so much. That’s the history of humanity, battles about boundaries, most of which were never problems but  regrettable situations.

I have a framed poster of the Little Big Horn Battlefield hanging in the entryway of my apartment. It’s hard to miss. Those who have noticed might wonder why but no one says anything.

It’s a view of a lone, white granite, military marker shadowed in golden grasses. Distant mountains purple under the haze of an azure sky. A Montana native, many times I walked the ground where a yellow-haired white man made a stand.

In my years as a middle manager for the state of Florida, I preferred the grasses of the Little Big Horn poster to the parking lot view from my corner office window. It is hard to see the horizon in Tallahassee, land of longleaf pine and live oak but it took me years to see the forest. 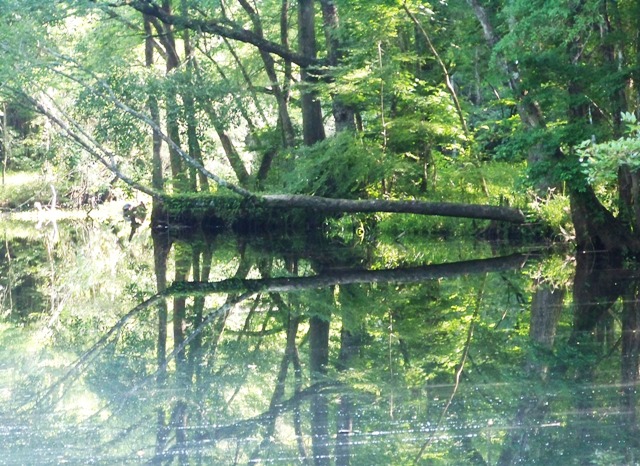 I believed everything was “figure-out-able.” What was not working would–no matter what–a solution was available, if I just looked long enough. And search I did but not always with distinction, regrettably. Years later, boundary conditions are not so hard to recognize.

It’s always a choice, live mindfully or stir the pot. One is so much easier on the heart–and head–the choice is ever obvious if not easy. Equanimity helps. No, seriously, it does.

Staying curious opens me to the world as it is, such as it is, knowing I won’t figure it out, and that’s okay. Nothing stays forever, boundary conditions or the real problems of the world, for which there are too few solutions. It’s just easier to get pulled into boundary conditions, the minutia of existence. That is figure-out-able. 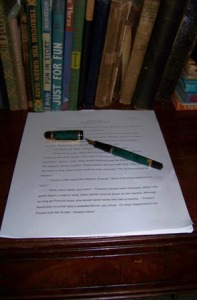 I really need just one boundary condition: compassion, delivered firm and kind. I cannot think of one situation existing outside that boundary. It is a response for all occasions and sometimes, silence is the best wall of all.

My life is less the Little Big Horn battle than it was 30 years ago, and I have a Virginia Woolf poster that would fit its frame nicely. She, the woman of the transcendent sentence in a room of her own.

I can live with that.

“To let knowledge produce troubles, and then use knowledge to prepare against them, is like stirring water in hopes of making it clear.” Lao-Tzu
(Tao, Verse 87 as quoted in Mark Nepo’s Book of Awakening)

So very like “stirring the pot” was my initial reaction to this verse of the Tao as memories of harsh words—felt and returned—stirred one unkind pot after another. Never once did I think to take it off the stove nor did I imagine knowledge in any way other than as a glorious fount, effervescent, pure, dependable.

How sure I was of so much and so many–then.

Now, I appreciate knowledge within the context of creativity—the act of imagining—one of the greatest gifts life offers, requiring only an open heart.

As I begin my third act, words remain a major force in my life; I am so curious about so much. More than ever, I write, something I never quite accomplished with all the pot stirring although writing was my constant goal.

“Feeling unworthy or insecure, we create a goal, in hopes that achieving this will make us feel good about ourselves. Then we’re off scheming for success, preparing against failure, stirring the water, hoping it will go clear” (Nepo, Book of Awakening).

Seventeen years ago, my goal was to write a novel, which I managed amid much pot stirring. Always, I spoke of the experience with false fondness. I wrote 80,000+ words, allowing myself to tread water in any current of thought.

Frankly, I felt quite good about myself, proud even, for accomplishing my goal. To be honest, every year since writing that original draft, I tried one writing goal after another, stirring and stirring.

One of my favorite far afield attempts was to collaborate on an inspirational book of vignettes with the actual working title of Rising to the Occasion When You Can’t. Outside of considerable pot stirring for three years, our hearts were not open to a word we wrote.

From time to time, I returned to the goal of revising the 380+ page manuscript word by word—certainly a worthwhile goal within the first year of its writing—but at seventeen years later, it was time to take the pot off the stove.

“The mind is a spider that, if allowed, will tangle everything and then blame the things it clings to for the web it wants to be free of. I have done this with dreams of greatness and hopes of love, wanting so badly to see myself clearly in the water, while I kept stirring and stirring” (Nepo, Book of Awakening).

As I mentioned in my last few blog posts, I am yet again working with this first novel draft. Pursuing knowledge within experience, I stirred myself into a month-long, writing workshop. After so many years of empty goal-gazing, it took most of the workshop for the waters to still.

Truly, I did not recognize the actual moment the waters cleared. It was a gradual realization that I no longer was “scheming for success” or weaving any web. Frankly, my sediment sunk.

It was clear that I “don’t have to be finished in order to be whole” (Nepo) as a writer or as a human being. So, for the first time in seventeen long years, I saw the draft of my novel for what it is: the story of a moment passed, completely. Its worth is immeasurable.

With waters clear, I write.

Note: I am publishing only one post this week but will resume publishing two posts per week beginning Monday. As always, feel free to comment or Email me! your comments.